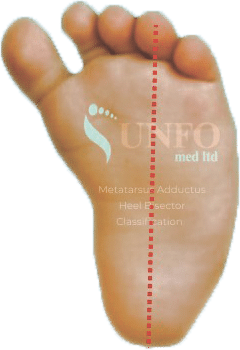 Pigeon feet, also called in-toeing, is when your feet point inward instead of forward. Pigeon feet are common in young children.

The condition resolves on its own without treatment for a large percentage of mild cases, but we can not predict which case will resolve itself and which will not.

What are pigeon feet?

With pigeon feet, your child’s feet point toward each other instead of forward.

Pigeon-toed walk are commonly caused by bones or joints that don’t point the right way (misaligned).

It’s normal for parents to worry about their children, especially when they are babies, and can’t tell you if something hurts. (1) But they don’t cause pain.

In most cases, they resolve on their own without causing long-term issues.

How common is the pigeon-toed walk?

approximately 5-7% of infants are born each year with pigeon feet, for example in the USA alone it’s a massive number of almost 300k annual cases.

Pigeon toed walk is common in the first few years of life. As the condition usually gets better as children learn to walk, they are less common as children reach adolescence.

Infrequently, they may last into adulthood.

How does pigeon-toed walk affect my child’s body?

Your child’s feet may turn in at rest and/or when walking. Although this might look different to you, the pigeon-toed walk is quite common.

Therefore all cases of metatarsus adductus should be diagnosed in the hospitals and should be treated under the age of 9,1 0 months.

When bones in the foot, shin, or thigh aren’t aligned, your child’s healthcare provider may use the term “pigeon feet” or in-toeing. (2, 3) There are three common causes of pigeon-toed walk:

Metatarsus adductus is a malformation in the midfoot that is present at birth (congenital). The toes point toward the center, giving the foot a “C” shape.

This is a common cause of pigeon toes in babies younger than 12 months of age.

Certain things may make your child more likely to have metatarsus adducts, including if your fetus was breached if there was not enough amniotic fluid (oligohydramnios), and family history.

2. The shin bone (tibia) – The most common cause of pigeon toes that develop between the ages of 1 and 3 is when the shin bone or tibia is turned inward (inward tibial torsion), toward the middle of the body.

If your child’s tibia is inwardly rotated, they may appear bow-legged. This condition usually resolves on its own by the time your child is 5 years old.

It’s caused by an inward rotation of your thigh bone (femur). This condition can be passed on from parents to children.

Rarely, other problems can be associated with pigeon toed walk. These include:

What causes pigeon feet in adults?

For many children, pigeon feet develop in the womb. Limited space in the uterus means some babies grow in a position that causes the front part of their feet to turn inward.

This condition is called metatarsus adductus. In some cases, this occurs as leg bones grow during the toddler years.

Intoeing present by age 2 may be caused by a twisting of the tibia, or shinbone called internal tibial torsion.

A child age 3 or older may experience a turning-in of the femur, or thighbone, called medial femoral torsion. This is sometimes referred to as femoral anteversion.

Girls have a higher risk of developing medial femoral torsion.

What are the symptoms of pigeon feet?

In toddlers and young children with developing hips, pigeon toed walk is normal.

Even when caused by femoral anteversion, inward-pointing toes usually straighten out on their own as children learn to walk.

Signs of femoral anteversion usually first become noticeable when a child is between 2 to 4 years old, a time when inward rotation from the hip tends to increase.

The condition becomes most obvious when a child is 5 to 6 years old.

If your child has any of the following symptoms of femoral anteversion, it’s a good idea to talk with their doctor:

>> Pigeon toed walking.
>> inability to walk with their feet close together and legs straight.
>> running with their legs swinging out.
>> tripping and falling often.

How are pigeon feet diagnosed?

If your child has started walking, your healthcare provider will observe them, looking carefully at the angles of their feet, ankle, knees, and hips.

What tests will be done to diagnose pigeon feet?

Your doctor may also want to get images of your child’s feet and legs. Imaging tests may include X-rays or CT scans to see how the bones are aligned. A type of X-ray video called fluoroscopy can show the bones in your child’s legs and feet in motion.

A pediatrician may be able to accurately diagnose the cause of your child’s pigeon toes. Or you may need to see a specialist in pediatric orthopedics if the condition appears to be severe.

How are pigeon feet treated?

Most of the mild cases of pigeon feet (85%) get better on their own. Depending on the cause of pigeon feet, your healthcare provider may just watch and wait.

Or they might recommend exercises or physical therapy to fix it. (7, 8) Very rarely, other treatments may be considered, including:

The UNFO brace is a revolutionary treatment method invented by MD Izak Daizade in order to treat infants that are born with pigeon feet.

The UNFO shoes are the most advanced metatarsus adductus shoes today based on dozen of clinical research.

UNFO was approved by the FDA and by the CE, and it’s used by the top orthopedic pediatrics today such as Prof. John Herzenberg to treat newborns with this deformity.

It’s crucial to diagnose the deformity on time while the infant is born because the best treating window for UNFO is under 9 months before the baby starts walking.

If the metatarsus adductus is severe or doesn’t improve on its own, your child’s healthcare provider may suggest a series of casts to stretch and lengthen their muscles.

(9) As you might imagine, it’s very important to keep your baby’s casts clean and dry. But it’s no small task. The casts may also cause itching and foul odors.

Call your child’s healthcare provider to discuss any questions about serial casting.

If severe tibia-related pigeon feet are causing functional problems as your child approaches adolescence, your healthcare provider may refer you to a pediatric orthopedic surgeon to discuss the possibility of surgery.

(10) Surgery isn’t generally recommended for femoral anteversion but may be considered for children older than 11 with severe symptoms.

Can pigeon-toed walk be prevented?

When it comes to prevention, we look at the risk factors related to a disease in terms of things you can change and things you can’t change. The causes of pigeon-toed walk aren’t something you can do anything about. (7) They include:
A twin or multiple pregnancies.
Not enough amniotic fluid (oligohydramnios).
A large fetus.
Breech position.
Normal variant.
The good news is that pigeon toes rarely cause pain and tend to get better on their own.